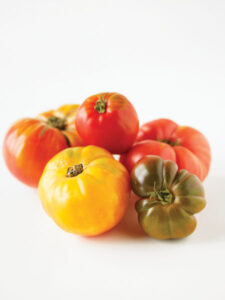 The mouth-watering anticipation of ­taking that initial bite of ­deliciousness from their first home-grown tomato makes gardeners antsy to work that soil. Unless you’re prepared to cover your plants when the temperatures drop, you’re probably looking at mid-May in Illinois.

Tomatoes are probably the most common and popular of garden vegetables, mainly for the large variety of uses. From fresh to preserved, slicing to juice or paste and sauces, you can’t beat a good tomato.

It’s odd that at one time the tomato was thought to be poisonous. This was more than likely due to the fact that compounds in the leaves and stems, as with most members of the nightshade family, are considered toxic.

But fortunately, time and breeding have turned the tomato into a plant that will grow in just about any type of conditions, with the exception of shade.

Tomatoes can be classified by ­colors ranging from the traditional red to yellow to pink to orange to purple to striped. Visit a farmers ­market in summer to really experience the ­diversity. These days, heirloom tomatoes are gaining in popularity as gardeners and John or Jane Q. Public want something just a little different.

For gardeners, color is probably not the best way to separate the plants, but fruit size is.

Okay, a little break here. The ­argument of whether a tomato is a fruit or vegetable comes into play. It’s not that complicated if you realize you are talking about two things.

Botanically speaking, the tomato is the fruit of a vine. It’s a ­ripened ovary with seeds. But so are a squash, cucumber, watermelon, green bean, pepper and eggplant. If you call ­tomatoes a fruit, you must call ­cabbage – “leaves”, broccoli – “flower buds” and an ear of corn – “seeds.”

In essence, if you call tomatoes a fruit, then there is no such thing as a vegetable.

Vegetable is a horticultural classification based on whether the plant is an annual, biennial or perennial, and whether we eat it for its ­sweetness such as a dessert. Most vegetables are annuals with the exception of ­asparagus and rhubarb, and the ­latter is used more for desserts than as a vegetable course, though it’s far from sweet.

Anyway, for tomato fruit size, you can start with the slicing tomatoes with a fruit easily sliced and placed on a BLT sandwich or surrounded by mozzarella cheese and basil. Some of the slicing tomatoes are quite large, and are generally known as beefsteaks. They tend to be juicier and cause red liquid to spill down your chin as you bite into a hamburger with a beefsteak slice on it.

Beefsteak tomatoes tend to ­suffer more blossom-end rot, insect and bird ­problems, and plants don’t seem to ­produce as many perfect tomatoes. But once it’s sliced and eaten, who cares?

Plum and pear-shaped ­tomatoes are generally about the size of your fist, more or less, and have more meat in them than juice. That makes them perfect for sauces and pastes because you don’t have to keep cooking them down.

The smaller the tomato, the more likely you’ll find it only in red and ­yellows, though plant breeders keep trying for other colors.

Ultimately, read the tag. That should give you a good indication of color and size. But it is possible for plants and labels to get separated, and since young plants tend to look very similar you’ll have a nice surprise once they start producing fruit.
David Robson is Extension Specialist, Pesticide Safety for the University of Illinois. drobson@illinois.edu