Got electricity? Thank a lineman 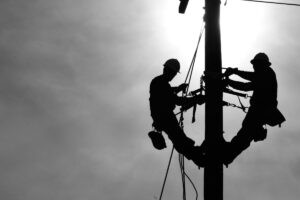 The U.S. Bureau of Labor Statistics puts electric ­utility line work among the nation’s top 10 most hazardous ­professions, according to the agency’s most recent census using 2014 data. Electric line technicians recorded a 19.2 fatality rate per 100,000 workers, ninth on the list. While the number of lineworker fatalities has declined since 1994, about three million nonfatal incidents were reported in 2014. Those employed as loggers, fishermen, aircraft pilots and flight engineers led the rankings, with logging ­notching a fatality rate well above 100.