Illinois Country Father of the Year

Wearing fish-adorned suspenders, a well-worn Polo-style shirt and a pair of jeans, Jack Graves blends into the crowd as one of the good ol’ boys with a penchant for fishing. The look may not be GQ in terms of today’s fashion police, but it speaks volumes for this comfortable but genuine father, grandfather and businessman. In the town of Elizabeth, Ill., Graves stands as a testament to hard work, fair dealing, leadership coupled with “servantship” and family unity.

You can find the 76-year-old Graves on nearly any given day at the Elizabeth Garage, a hub for all things car-related. It’s a family business established by Grave’s parents back in 1925 in what had been a burned-out shell. Just eight years after Jack was born, he would lose his father to an apparent heart attack, leaving his mother to run the business – one of three women car dealers in the state at that time, Jack says with pride shining through.

As he wanders around the busy garage, weaving amidst the cars and mechanics and stopping to talk with a long-time customer, it’s easy to see Jack’s at home. But he’s not just hanging out to mingle. He’s working.

“I don’t like to be idle. I know they (others at the Garage) don’t like to clean the toilets, sweep the floors and run the wrecker. I can only clean the house so much,” he says. So, he puts himself to work among his friends and family.

Yes, the Garage elevates the phrase “all in the family.” Son, Jeff, known to friends as Monk (for monkey), works at the facility, as well as granddaughter, Kelsea and grandsons, Matt and Cody. All four lovingly jest about Jack’s presence.

“He’s retired twice, but he doesn’t trust us,” Matt says with a smile and a quick rephrase: “We can’t do it without him though.” In fact, grandpa still runs the body shop, Matt adds, getting away with affectionately calling Jack “old and ornery.” That’s part of Matt’s charm says Jack. “He inherited my skills of buying and sales.”

Kelsea (Graves) Brown, who was just married in June, puts her own affectionate twist on “grandpa.” She says her grandfather is “just wonderful – always giving and never asking for anything in return.

“There’s never been a bad memory (made) with him,” she says, but concedes he might contest that. “He helped teach me how to drive. I probably scared him,” Kelsea quips.

The family adoration never stops and the whole town of Elizabeth is celebrating Jack’s new title as Illinois Country Father of the Year 2012. Weeks before the celebration, posters were eagerly placed in store front windows announcing the crowning reception and inviting all to attend.

So what makes this man so special?

Sitting to talk with him in his over-sized family room – a room aptly named in this household – you would think Jack’s had the picture-perfect life. His broad smile and his exuberance flow through the conversation.

He started with childhood, then courtship days and his wedding. He married Jeanette on Dec. 26, 1955 in the midst of a big snowfall. He was just 19. They are still sweethearts, although just this year a medical condition has confined her to a local nursing home. Jack goes to see her regularly.

“The reason she married me,” he says with a big grin, “she knew if she could live with me, she would go straight to heaven.”

Jack was serving in the Navy when their firstborn, Jennifer was born in California.

“The doctor handed her to me and said ‘You have a lovely daughter. Give her all the love you can’.” And so it would be. Jack set about to raise Jennifer with care, then Julie, then Jay and the last born, Jeff, actually assisting in his delivery.

Jack, by all indications, is a positive man, always “seeing the glass half full” Julie says. But he could talk about difficult times if he chose. Like every family, this one has seen some true hardships.

Jennifer, like other readers, put her sentiments on paper and mailed them to Illinois Country Living, hoping her dad would be honored for his outstanding character. Her letter was chosen by an impartial committee at the Association of Illinois Electric Cooperatives as the winning entry. She denies she did anything special.

“All four of us could have wrote that letter,” Jennifer was quick to point out, a tribute to her selflessness and what her sister lovingly calls “Florence Nightingale” qualities. The letter suggests that her dad has overcome a lot of odds to be the kind, considerate man he is. And that he has been a surrogate father, helping raise her children when her husband Tom was killed in a car accident. Her sons, Matt and Mark, were just 8 and 5 years of age.

“My dad stepped in – both of my parents,” Jennifer recalls. “I was really grieving. They helped with the kids to make their lives more normal.”

She says for a while, it was like her children lost both parents. It took time for her to recover and her parents filled the parenting gap.

“I just love him to pieces – both my parents,” Jennifer says. Jack is also quick to compliment his children for their qualities.

Daughter Julie McDaniel of Lexington, Ky., speaks of yet another family crisis – her own health as a child. She was born with a birth defect and had to undergo open heart surgery at age 3.

“They sacrificed a lot … and I’m still here,” she says, noting that there was no insurance, a business to run and children to feed. Julie and her husband Darrell have made Jack a grandpa two more times. Karista and Darren are grandchildren, and there is one great grandson, Ashur.

Like others, Julie’s description of her father, makes him out to be – by all accounts – an angelic individual.

“My dad is very deserving. My sister is the sweetest, kindest, most gentle person on this earth. She learned all of that from my father,” Julie says.

“He treats everyone with the utmost respect. He’s a wonderful human being… a wonderful role model,” she adds.

The longevity of the Garage is a testament to Jack’s character, too, and a big part of the reason Jack holds near-celebrity status in this small northwestern town and beyond. Customers often drive long distances to deal with the Graves family.

“I think they like the small town atmosphere,” Jacks says of his long-time patrons.” He’s been working at the Garage since July 1, 1958. He started in the body shop, his first job when he got out of the Navy.

Just how many cars have been serviced through the years at the Elizabeth Garage will never be known. An all-consuming fire on May 11, 2005 took the building down to its foundation. While the structure was rebuilt, the records were destroyed. Jack says, however, his mental log is still sharp.

“I could probably tell you how many goats and hay stacks were traded in” for service, he says with a laugh.

Making the rounds through the garage, son Jay appears on a stop from the post office. His comments about “dad” were succinct.

“He’s the most honest man I’ve ever met. He’s an excellent teacher and role model. I wish I could fill his shoes.”

Monk was nearby, too, with daughter Kairee hanging out over his shoulder at the service desk. She loves grandpa, too, brags on him for his involvement in the community and says, “He’s a great cook.” Just what’s he good at preparing? The answer to that is “Grandpa’s River Potatoes” – a recipe he agreed to share with Illinois Country Living readers.

Monk says Jay, his dad and himself have made a lot of memories through the years, none sweeter than a Tiger Cruise from Hawaii to San Diego. Since all served in the Navy, the cruise was a celebratory ending to time served. A picture proudly displayed in the lobby of the showroom floor shows the three enroute during the voyage.

While family and vehicles are a fascination for Graves, there’s some passion for water that also runs through his veins. He’s a fisherman at heart and is always waiting for his next adventure in the boat. 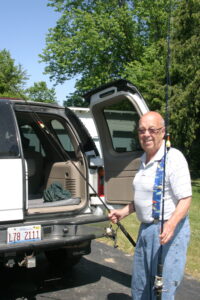 He and a group of guys have been going fishing for 25 years, to places in Canada, Lake of the Ozarks and in Wisconsin.

“We do all of our cooking. It’s really laid back. We play an awful lot of Euchre.” As for a prize catch, he talks of two 38-inch Northerns, caught in Red Lake, Canada on the Trout River. But he also likes the pan fish from Wisconsin – the crappie and the blue gills. And his face lights up when he talks of bait, whether it’s minnows, waxies or lures commonly called “spoons.”

Does he have a fishing pole handy?

“Right in the back of my car,” he says, pulling a couple from the back of the vehicle. “I won’t leave home without it.”

And with that, the 2012 Father of the Year headed off for yet another fishing adventure.

Grandpa’s River Potatoes
The Jack Graves’ family raves about this recipe. He typically makes three batches at a time for family get-togethers. He was willing to share it with readers. Enjoy!

For a single batch:

End result – your own family favorite.

Read the winning entry and other letters of nominees online at:
icl.coop/nomination-letters

Celebration story and photos at:
icl.coop/celebration