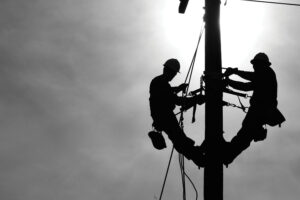 The U.S. Senate in recognizing April 18, 2013, as National Lineman Appreciation Day passed a resolution honoring lineworkers for their efforts at keeping power flowing.

Across the nation, more than 19,000 men and women maintain 2.5 million miles of line for electric co-ops, public power districts and public utility districts. A bill introduced by U.S. Sens. Johnny Isakson (R-Ga.) and Michael Bennet (D-Colo.) ­“recognizing linemen, the profession of linemen, the con­tributions of these brave men and women who protect public safety” was passed by unanimous consent. The ­declaration resolves that these ­workers…are steeped in personal, family and professional tradition; are often first responders during storms and other catastrophic events, working to make the scene safe for other public safety heroes; work with thousands of volts of electricity high atop power lines 24 hours a day, 365 days a year, to keep electricity flowing; must often work under dangerous conditions far from their families to construct and maintain the energy infrastructure of the United States; and put their lives on the line every day with little recog­nition from the community regarding the danger of their work.

Computer shopping 102
Tips to cut your utility bills
A boating accident you never thought about
From water famine to feast
Who rescued whom?
Humane investigator SHAREs her stories of equine salvation
Delivering business success