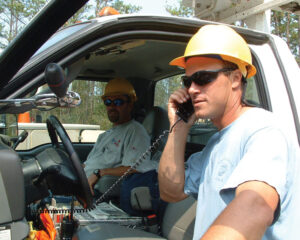 Communication is critical for first responders like EnerStar Electric Cooperative linemen Troy Lewis and Greg Hollingsworth who responded to the Katrina Hurricane disaster in 2005.

Electric cooperatives are closely monitoring the development of a new first responder communications network. Imagine a public safety first responder able to communicate on a dedicated cellular-type nationwide network; ­accessing databases from the field, transferring data and images on demand without delay.

During a disaster, com­munications is critical between agencies and other first ­responders like linemen. This network could allow utilities a dedicated communication channel with police and fire in the case of downed power lines. The establishment of a national communication network for first responders was one of the final outstanding recommendations from the 9/11 commission to help increase national security. It is anticipated the broadband network will be built with standards-based 4G/LTE broadband technology.

As part of Title VI of the Middle Class Tax Relief and Job Creation Act of 2012, a portion of the radio spectrum for the creation of a nationwide broadband network was dedicated to public safety communications. States have an important role in ­building and operating the network and Illinois is taking a number of actions even though the network’s ­governing authority, the First Responder Network Authority (“FirstNet”), is responsible for the design, building and ongoing operation of the network.

If you have any questions about Nationwide Public Safety Broadband and what is happening in Illinois please send an email to ema.scip@illinois.gov or go to the website http://firstnet.illinois.gov.