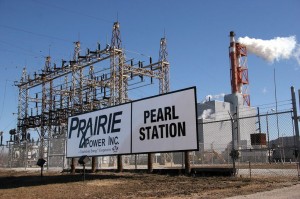 Effective June 1 Prairie Power, Inc. will close the Pearl Generation Station located near Pittsfield. The small 22-megawatt, coal-fired base load plant went on line in 1968. The plant was only operated when the cost of production was lower than power purchased from the Midwest Independent System Operator (ISO). In 2010, the plant provided 4 percent of PPI’s energy requirements.

Superintendent of Generation Randy Fisher said the generation and transmission co-op tried to convert the small plant to a renewable biomass generating facility. The move would have saved several jobs and the plant would have been a good size for demonstrating the feasibility of biomass generation in Illinois. The co-op also owned 1,065 acres of land that could have been used to grow biomass plants, but the land was sold in February. Area farmers could have been employed to grow biomass plants for the generation facility. The plant was already successfully burning a small amount of waste seed corn.

PPI President/CEO Jay Bartlett said, “We wanted to convert it to biomass and it was the perfect size for that project, but it is out of the money.” The biomass conversion of the Pearl Plant would have been difficult because of environmental uncertainty with biomass plants and because of the low cost of natural gas.