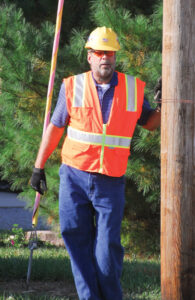 When rushed for time, many of us have cut corners when it comes to safety—whether it be driving too fast or hurriedly trying to finish weekend chores and projects around the home. It could even involve taking a chance with electricity when we know it’s not a smart move. “You may get by with it a thousand times, but at some point it can happen to you. It can happen to anybody….you never suspect that today’s going to be the day,” says Tom Dickey, an experienced contractor from Auburn.

At the end of a project at a construc­tion site in 2002, it turned out to be “the day” for Tom Dickey. A small job had been added to the day’s directional boring work—after Tom’s safety gear had already been sent back to the shop. He made a decision, in favor of time and ­efficiency instead of safety, to go ahead and dig a 40-foot section of conduit. He suffered life-changing burns and injuries when he came into contact with underground power lines.

This decision almost cost him his life. As an experienced professional, he knew all of the correct procedures, but while adjusting the conduit’s path in the ground, he made a small slip and received a high-voltage shock. This kind of electric contact inflicts burns on a person—from the inside-out—that can continue to burn after contact. He survived, but he spent months in the hospital undergoing surgeries—including skin ­grafting. A flap surgery was particularly ­difficult because the hole in Tom’s hand was so deep that the bones were showing and the tendons had been severed as a result of electrical burns. They sewed his hand into his ­abdomen to allow tissue to grow back over the bones.

According to his wife Bonnie, “It was watching him go through all the pain that was the ­hardest part. After the flap surgery, it was really tough on him. He just had to lay in bed with his hand attached to his side for weeks. He asked me most days to just sit and read from the Bible to him. That brought him comfort because he was in so much pain.”

The long and painful ­recovery was only part of his ordeal. There was also the pain of “watching my family and the ­suffering and anguish they went through. I know they were freaking out about losing a dad or losing a husband,” reflects Tom. The accident made it impossible for Tom to work for many months as he had extremely limited mobility and had to undergo many surgeries. With strong faith, family and friends, Tom persevered.

Tom stresses that even a homeowner who puts a shovel in the ground risks his or her well-being and ­damage to underground utilities if he or she did not get these lines marked. The first step in safe digging is to call 8-1-1, the national “Call Before You Dig” number, to get connected to your area’s locating service to have underground utility lines marked. The ­service is free and could prevent a tragedy.

“If it takes 10 minutes out of your day to do it right, it’s a lot better to take that time than to go through six months of grief and years of ­rehabilitation,” says Josh Dickey, Tom’s son.

“People have got to understand that when you deal with electricity and you do silly things, it changes your life. It changes the people’s lives around you,” says Tom. Give those that you care about TLC by sharing Tom’s important safety message.

“We’re grateful to Tom and his family for their willingness to help prevent other tragic accidents with underground utilities by sharing the lessons learned from their difficult experience,” says Molly Hall, ­executive director of the Safe Electricity program.

Visit www.SafeElectricity.org to see the video of Tom’s story.