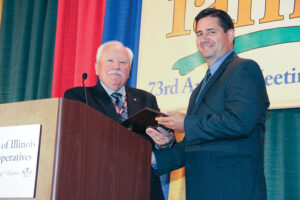 “This award is made in recognition of Rep. Costello’s dedicated public service to all ­citizens of the state of Illinois and for out­standing ­contributions to the rural elec­trification ­program,” said Kraft.

Rep. Costello is a supporter of Illinois electric ­cooperatives, and their rural ­member-owners, on a wide ­variety of issues. As Vice-Chairman of the House Agriculture Committee, he has been a strong advocate of issues impacting rural Illinois. For example, last year he introduced and sponsored electric cooperative-supported legislation allowing non-profit cooperatives to be formed to own and operate anaerobic digesters. Anaerobic ­digesters can turn waste from livestock operations into methane gas that can in turn be used to generate ­electricity. Forming cooperatives would help make this form of ­renewable energy more economically viable.

“Representative Costello doesn’t hesitate to meet with us when we need to discuss an important piece of ­legislation, and he always makes time to meet with the students representing electric cooperatives when they are in Springfield during Co-op Youth Day at the Capitol,” said Alan Wattles, president/CEO of Monroe County Electric Co-Operative in Waterloo.

Wattles pointed out that Rep. Costello is following in the footsteps of his father, former Congressman Jerry Costello, in receiving the electric co-op’s public service award. “As a member of our cooperative he understands and is supportive of the cooperative business model. We appreciate his service, his support and his friendship.”

Rep. Costello said, “I am honored to receive this award. One of the reasons that supporting rural electric ­cooperatives and their member-owners is so easy for me, is that I am a member of one. I enjoy representing downstate Illinois and being a champion for the people of rural Illinois.”