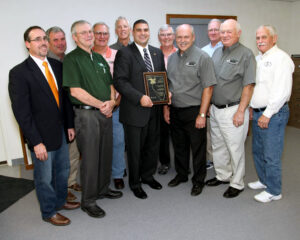 “It has been an honor to work with Spoon River Electric Cooperative, and I’m very ­humbled to receive this statewide ­recognition,” Unes said. “Building relationships and ­working with the Electric Cooperatives, ­especially Spoon River Electric locally, has not only been enjoyable but also very rewarding as we continue to work together and find solutions to keep costs down for the end user. An example of this is the great working relationship developed as I sponsored and passed House Bill 3825, the copper theft bill.”

That legislation, which takes effect on Jan. 1, 2013, will assist the electric co-ops’ efforts to stop the growing problem of copper theft that endangers the public, line workers and the thieves who steal copper from electric utility sub­stations and power lines.

“Almost all of the Illinois electric cooperatives have been impacted by this epidemic of copper theft,” said Duane Noland, President/CEO of the Association of Illinois Electric Cooperatives. “This legislation makes it tougher for thieves to sell copper wire to scrap dealers, and our electric co-ops sincerely appreciate Rep. Unes’ leadership in sponsoring this bill.”

“Mike Unes has been great to work with,” said Spoon River Electric Cooperative President/CEO Bill Dodds. “He is always responsive and accessible. This legislation shows that he not only listens to our concerns, he does something about it.”

The new law requires scrap dealers to record all ­transactions, eliminating the state’s existing $100 ­threshold. Cash payments will be eliminated, with sellers being paid by check three business days after a transaction. And anyone with a felony drug conviction will be banned from ­selling metal for 10 years.

Keep on the sunny side…
Tractor club’s best kept secret revealed each year in Penfield
Staying warm and safe this winter
One voice, one vote
And now for the rest of the story
Preserving Our Rural Heritage
The Association of Illinois Electric Cooperatives salutes…
Window Wizardry
Don’t let dust bunnies slow you down