Shelby Electric Cooperative comes to the rescue of fire department 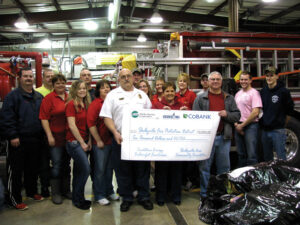 A year ago during an oil well fire a lot of the fire­fighting gear of the Shelbyville Fire Department was damaged and left unusable. “We believe it was a lightening strike, ­during a bad rainstorm, that struck an oil battery southeast of Shelbyville setting off a fire in one of the tanks, which eventually exploded,” said Fire Chief Gary Lynch. During battle, the team’s uniforms were drenched with oil and other debris.

Shelby Electric Cooperative raised $10,000 to aid the department in replacing damaged firefighting uniforms. “I coordinate a balloonfest at Lake Shelbyville, and during the glow portion we always do a cookout type fundraiser,” said Kevin Bernson, Media and Public Relations Manager for Shelby Electric Cooperative. “The husband of one of our cooperative employees works at the fire department and said that a lot of their clothes got ruined by fuel or oil, or something that got on their gear that made it very unsafe.”

“We probably had more than 6,000 people come out to this cookout glow,” said Bernson. “Shelbyville’s population is just under 5,000, so we had people coming from all over the area. We were able to match the fundraising donation to get $10,000 to go towards this equipment.”