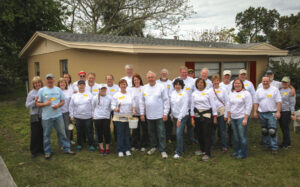 In the end, the bricks turned out just fine. They had JoAnn Reddick concerned for a spell. Red bricks wrapped around the lower third of the front of her small, 55-year-old home and she was a little hesitant about letting some unknowns from out of town perform a beige paint-over. JoAnn and Benjamin Reddick’s house was one of 30 targeted Feb. 21 for tender, loving and intensive improvements during the seventh annual Touchstone Energy® Cooperatives Community Service Project.

More than 100 co-op volunteers from across the country worked in conjunction with Rebuilding Together Orlando, a nonprofit dedicated to revitalizing communities. Association of Illinois Electric Cooperatives Marketing Administrator Nancy McDonald was one of the volunteers. McDonald says, “Participating in the Touchstone Energy service project was incredibly rewarding. We all worked together so well, and I believe the effort was truly life-changing for the homeowner. It was the epitome of Touchstone Energy’s ‘commitment to community’ core value, and I plan to participate in the future.”

Committment to community is one of the Touchstone Energy Cooperatives’ values and a guiding principle for all cooperatives. “This is what cooperatives are all about,” said Mary McLaury, interim COO of Touchstone Energy®. “They’re committed to the people back home. But when they come into a new community, they’re willing to help out people in need.”

The wave of helping hands knocked more projects off Rebuilding Together Orlando’s lengthy waiting list than the group might accomplish in a month, according to Executive Director Ed Green.

Making the Past Present
DropBox to the rescue
More on how to properly prune
The worst Civil War tragedy few remember
Building a new home?
The Devil’s web:
Five things I’ve learned about saving energy
Consider safety when planting trees