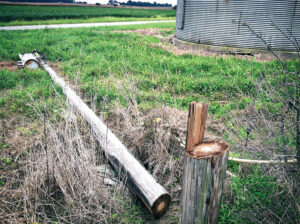 Copper thieves have come up with a new and costly way to get what they want from an Illinois electric cooperative: cutting down poles.

“It began with just a couple of isolated poles, and then it began to spread throughout our territory into parts of three different counties. Before we knew it, we had more than 25 poles that were cut,” said Randy Olson, Director of Communications at Wayne-White Counties Electric Cooperative in Fairfield.

Whoever did it avoided poles on roads or near homes.

“They would do this in isolated areas such as behind barns, behind grain bins or trees,” said Olson. “They were never doing it in high-visibility areas and they left behind a huge bill for co-op members —in excess of $25,000.”

Wayne-White members are also feeling the pinch. “Anything on a member’s side of the meter, of course, they’re responsible for. And these people are stealing copper on their side of the meter, too,” Olson said. “It’s costly for everyone.”

That led the Wayne-White board of directors to authorize a reward.

A reward for $6,500 was offered. The co-op put up $5,000 and the Illinois Farm Bureau and Crimestoppers kicked in $1,500. “Now that the reward has been offered the thefts have stopped.” Olson said.

Wayne-White and other electric co-ops across the state have been working with county sheriffs as well as recyclers to try and put a stop to copper theft, but members can help too. If you see suspicious activity in and around electrical utility installations notify your local law enforcement office immediately.

A new Illinois House bill would create the Recyclable Metal Theft Task Force. The Illinois secretary of state would oversee the 18-member task force. “Criminals committing copper thefts are victimizing residents and local businesses alike,” said Rep. Jay Hoffman, D-Swansea, the bill’s sponsor. “This problem is not going to go away on its own. We need to come together to find an effective long-term solution before more damage is done.” One seat would go to a representative of the state’s electric co-ops.