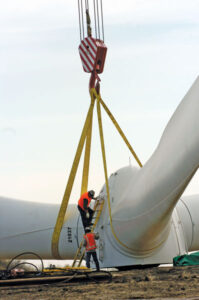 Wind energy for the first time became the number one source of new U.S. electric generating capacity, providing some 42 percent of all new generating capacity. The top five states for new capacity installations in 2012 include Texas, California, Kansas, Oklahoma and Illinois.

Illinois had its most successful year ever. Ranking number five in new capacity, Illinois saw the instal­lation of over 800 MW, with half that output sold into the Tennessee Valley Authority market. As one of America’s wind power hubs, Illinois is home to wind power ­innovation and this year, it installed the first concrete wind tower, which the manufacturer says can support taller turbines to access better winds.

The global wind energy industry will gather in Chicago, May 5-8, 2013, for the world’s largest annual wind power event, WINDPOWER 2013. Thousands of workers and leaders from all sectors will attend to show their wares, attend conference sessions and seek further solutions for success.