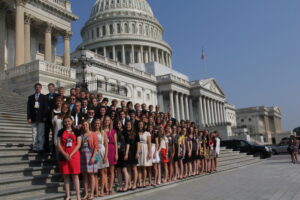 In June 75 of Illinois’ best and brightest young people met with Rep. John Shimkus and other congressmen from Illinois while in Washington, D.C. on a leadership building trip sponsored by the Illinois telephone and electric cooperatives.

After a 20-hour bus ride home on June 22, 75 of Illinois’ brightest high school students were a little low on energy but full of good memories from this year’s Youth to Washington Tour. At the end of trip the students hugged and said their goodbyes at the Association of Illinois Electric Cooperatives (AIEC) office in Springfield. You could tell that some lasting friendships had been made during their week in Washington, D.C.

More than 1,560 high school students and 281 chaperones from electric cooperatives across the country participated in the tour. The main purpose of the trip was to give young leaders an inside introduction to government and the cooperative business model. The students met with Representatives John Shimkus, Jerry Costello, Tim Johnson, Randy Hultgren and Bobby Schilling.

The Youth Tour is celebrating its 53rd year. One student from each state is selected to be a representative on the Youth Leadership Council (YLC). Sarah Hempen from Monroe County Electric Co-Operative, Inc. was chosen by her peers to represent Illinois on the YLC. Hempen’s duties will include attending the Youth Leadership Conference in Washington, D.C., the Association of Illinois Electric Cooperatives’ Annual Meeting in Springfield, the NRECA Annual Meeting in New Orleans, the Illinois Electric and Telephone Cooperative Youth Day and providing input for the NRECA’s Youth Education and Leadership programs.

A high percentage of young people who go on this trip have an interest in government, but for some it is an introduction to government. Some of the students go on to work in state or federal government after school. Some of the more notable past participants of the Youth to Washington Tour are Art Tenhouse who was a State Representative from 1989 to 2006, Tom Ryder who served as an Illinois State Representative from 1983 to 2001 and Dr. Robert A. Easter who is the current President of the University of Illinois at Urbana-Champaign.