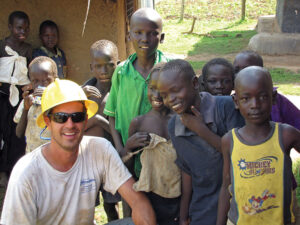 NRECA International Volunteer lineman Phil Hogan from Habersham EMC in Georgia takes a break from wiring new utility poles and is ­surrounded by children from Sudan.

You don’t hear much about bipartisan support on anything these days, which makes passage of the Electrify Africa Act one bright spot. The U.S. House of Representatives in February passed S. 2152, the Electrify Africa Act, with strong support from electric cooperatives and the NRECA. The Senate passed the legislation unanimously and the bill was signed by President Obama. It ­encourages public-private partnerships that will bring electricity to 50 million people in sub-Saharan Africa and help lift ­impoverished African communities out of subsistence living.

NRECA Interim CEO Jeffrey Connor said, “This bipartisan bill makes it possible for 50 million people in Africa to have access to electricity by 2020. With the continued support of America’s electric cooperatives, we look forward to expanding the benefits of power to rural areas around the globe.”

Greek Chicken
Love is the mane thing
Is $15 million enough?
Filling the holes in memories
Questions and answers about your social security
Tricks to dividing and conquering spring chores
A home as a system
Don’t forget safety when considering the addition of solar
Which laptop should I buy?