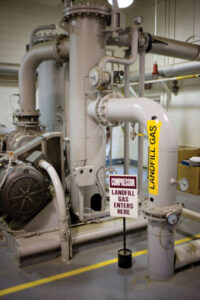 On July 1 the U.S. EPA released an update to 18-year-old standards for air pollution from solid waste landfills. New and modified landfills would be required to use technology to capture two-thirds of their emitted methane and other air pollutants by 2023. Now the EPA is in the public input phase for determining the final rule.

Landfills with a capacity of 2.5 ­million metric tons would be required to reduce emissions by 13 percent more than under the 1996 regulations. Once the landfill’s emissions reach a certain point, gas collection, routing and ­burning by flare or in an enclosed combus­tion device would be required.

Methane is a more potent greenhouse gas than carbon dioxide and municipal solid waste landfills are the nation’s third-largest source of man-made methane emissions in the United States. But electric cooperatives have found a solution — turn the waste methane into electricity.

Wabash Valley Power, a generation and transmission cooperative serving three distribution co-ops in Illinois and others in Indiana has been a leader in this type of ­renewable energy generation using landfill waste gas. The latest gas to energy project will produce 3.2 megawatts of power-enough energy for 14,000 homes. It is the 14th landfill gas-to-energy Wabash Valley Power facility.

Two 20-cylinder Caterpillar engines burn landfill methane gas, each of which generates 1.6 megawatts of electricity. The facility is designed to be scalable, with the ability to grow to four engines as the landfill’s gas ­generation increases in future years.

“Our goal is to operate our landfill facilities in a way that meets the ­highest environmental standards,” said Brad Eisenhart, Senior District Manager for Waste Management of Indiana, who works with Wabash Valley Power on the projects.” The Twin Bridges landfill and gas-to-energy facilities do that and more by managing waste gases and channeling them to generate energy. This benefits the community in ways that makes our people and company very proud.”

Waste Management has established as one of its sustainability goals doubling its waste-based energy production by the year 2020, he said. Achieving this goal would mean its facilities across North America generate power to serve more than 2 million homes