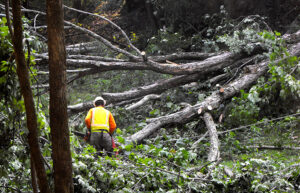 The vicious and damaging thunderstorm front that raked Chicago, Ohio and other states has a name: ‘derecho.”

Pronounced similar to “deh-REY-cho” in English, the word is Spanish for “direct” or “straight ahead.” This is exactly the description of the hurricane force winds, from 58 to over 90 miles per hour, experienced in Ohio and other states where the dangerous storms occurred.

Southern Illinois was hit by a ­similar storm a few years ago and some described it as an inland hurricane.

The power of the principle of cooperation among ­cooperatives is never more vivid than during a disaster like this. Electric cooperatives from Kentucky, Illinois, Michigan and Pennsylvania answered the call for help, sending 27 crews to aid restoration efforts just to Ohio alone.

Outages of this size often occur in the winter. This time severe weather is blamed in the deaths of at least 17 people, and in some areas 100-degree temperatures threaten those who are vulnerable to high temperatures.

In the Chicago area, ComEd reported outages for more than 250,000 customers before restoring power July 1 to some 96,000.

Once again after a major outage, lasting multiple days, and ­covering many states, the call for burying power lines was demanded by some. While burying power lines avoids tree, wind and ice related outages, it doesn’t ­prevent all ­outages and the cost is as much as ten times more ­expensive. Outages on underground lines when they occur take longer to locate and repair. Study after study has shown that the impact on electric rates is not justified.