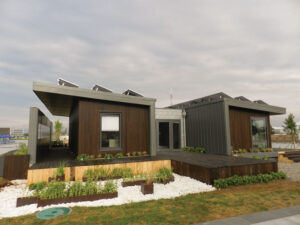 Students from the University of Illinois, partnering with students from Peking University, entered a demonstration home in the Solar Decathlon China competition held in October. The program challenges students to design, build and operate solar-powered houses that are cost-effective, energy-efficient and ­attractive. The winner of the competition is the team that best blends affordability, consumer appeal and design excellence with ­optimal energy production and ­maximum efficiency.

With 42 solar panels on the roof of the home called Etho, power production exceeded energy consumption in the home. Control and monitoring of the home’s systems was through an iPad. For example, a slider on the iPad could dim and even change the color of the home’s LED lighting fixtures.

“Our system was a lot more custom,” said Dan Murray, a computer engineering student and member of the ­automation sub-team. “Every other team that attempted an automation system adapted an industrial system for ­residential use, which is a bit unreasonable for even the most serious home automation hobbyist.

Even water-flow sensors tracked water consumption throughout the house. Pricing of both energy and water could be displayed on the iPad. The system also ­monitored photovoltaic production, temperatures and humidity throughout the home, carbon dioxide levels and other data.

Because Peking University had organized the ­competition, the Illinois-Peking team had been asked to build a showcase home, and was not officially judged in the competition.

Pipes pumped fluid through the panels absorbing heat and even slightly increasing the electrical output of the solar panels. The whole system was also integrated with the heating and air conditioning system.

Although the Illinois students have entered previous Solar Decathalons in the United States, this was the first event like this held in China. More than 60 U of I students participated in the two-year collaboration. http://www.solardecathlon.gov

Take action on energy costs
Co-op leader urges EPA to consider the cost of...
Sharing the harvest, farmers give back to 4-H
Bipartisan support for inland waterways vital to...