Here’s how big solar energy has gotten: the eclipse coming up on August 21 has utilities making plans to avoid power outages when the moon blocks the sun for two minutes and 40 seconds over the middle of North America.

No, you don’t need to worry about losing electricity—your local electric cooperative knows the eclipse is coming and will keep the power flowing. But that astronomical event does show how renewable energy is starting to make a difference as solar and wind power elbow their way into the more traditional electricity fuels of coal, natural gas and nuclear power.

“Electric Industry Generation, Capacity and Market Outlook,” a new report by the National Rural Electric Cooperative Association (NRECA), describes those changes and what they will mean for electric co-ops.

“The (U.S. Department of Energy’s) Energy Information Administration (EIA) projects that by 2018, non-hydroelectric renewables will be about 10 percent of the generation mix, which is a really big deal,” says Lauren Khair, an NRECA regional economic analyst and one of the authors of the report. “Back in 2008, just to give you an idea, the share of non-hydro renewables was around 3 percent.”

But the rapid rise is only half the story. Wind and solar also generate electricity differently, and that has utilities making changes in the incredibly complicated system of generation and transmission. 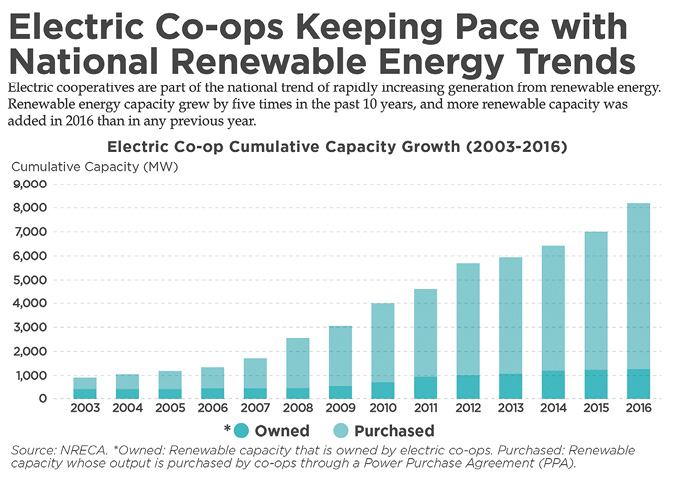 When the moon moves in front of the sun during an eclipse, “Solar shuts off very quickly,” says Michael Leitman, NRECA strategic analyst. “Then it comes right back to full power.” That can cause problems for an electric grid designed to generate power exactly when it’s needed, and to keep that electricity at a consistent frequency.

Traditional baseload resources, like coal, nuclear and natural gas, provide stability to the electric grid and prevent sudden shifts in frequency. Due to their intermittent nature, wind and solar do not automatically provide these benefits. As the share of wind and solar grows, this becomes more problematic. Luckily, new inverter technologies are emerging that can provide synthetic inertia to help alleviate this problem, in conjunction with more natural gas resources, which are more flexible than coal at adjusting to sudden shifts in supply and demand. Further, these flexible resources can ramp up faster when the sun stops shining or wind stops blowing.

The organization responsible for assuring resource adequacy of the electric grid, the North American Electric Reliability Council (NERC), issued a report suggesting that utilities prepare for the eclipse. NERC singles out California and North Carolina as states that are both near the path of the total eclipse, and that also rely on a lot of solar power. NERC says those states should “perform detailed studies and retain necessary resources to meet the increased and varying load” as the expected drop in solar will call for more electricity from other sources during those few minutes. The path of the total eclipse in North America will start in Oregon at 10:15 a.m. Pacific time and move across the country during the next hour-and-a-half, leaving South Carolina at 2:49 p.m. Eastern time. A partial eclipse will affect a much wider band along that route.

Government policies are a big reason for the expansion of renewable energy. Solar and wind power grew rapidly due to federal tax credits in 2012, slowed when they were expected to be discontinued, then picked up when the credits were extended. The tax credits even affect the time of year that renewable energy projects are built. As NRECA’s report states, “Most renewable projects are completed in the fourth quarter of the year, due in part to the timing of qualifications for federal, state or local tax incentives.” Projections for renewable energy show strong growth until 2020, then leveling off for several years as tax credits begin to expire. Renewable growth is projected to strengthen again around 2026 as electricity demand growth continues and more coal power plants are expected to retire.

Improved technology and lower prices are also pushing renewable energy growth. The NRECA report says, “States have been able to meet or surpass these [Renewable Portfolio] standards, in part because of declining costs of solar and wind … utility-scale solar costs for crystalline panels dropped 85 percent and utility-scale wind costs dropped 66 percent in the last seven years.”

Large-scale wind and solar installations tend to sit in wide-open spaces, so the electricity needs new transmission lines to get to where people live. The transmission system also needs to accommodate renewable energy generated only when the wind blows or sun shines. “The increase in variable generation to the wholesale market has led to increasing concerns about transmission congestion,” says the NRECA report. The report cites one estimate, from Edison Electric Institute, that investor-owned utilities plan to spend $22 billion this year on transmission projects, noting another speed bump to the development of renewable energy: “As transmission projects become more difficult to site due to environmental concerns, land availability, local opposition and other constraints, planners will need to find innovative ways to meet these challenges.”