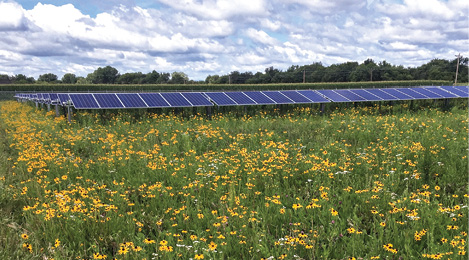 The federal government could designate the monarch butterfly, whose numbers have been in decline for decades, as endangered or threatened. In response, electric cooperatives with territories that overlap critical monarch breeding areas and migration routes are devoting land and labor to reverse the decline of this and other key pollinator species.

One such cooperative is Dairyland Power Cooperative, a generation and transmission (G&T) co-op based in La Crosse, Wisconsin, which provides power to Jo-Carroll Energy. It first caught the pollinator preservation bug in 1994 when it prepared to cover a closed 40-acre coal ash landfill near a power plant. General practice at the time was to plant grasses, but the co-op expanded that to native prairie of grasses and pollinator plants.

Now, the G&T is developing large plots at all 18 of its solar farms to host monarch butterflies, bees and other pollinators. The combined 250 acres of habitat contain a diverse mix of milkweed, black-eyed Susans, sunflowers, lupine, cornflowers, forbs and other species. Fifteen sites are already up and running.

Brad Foss, Dairyland senior environmental biologist, said efforts to sustain the monarch butterfly have “ramped up in the last few years, with the plight of pollinators” becoming more known. The rusty patched bumble bee, a Wisconsin native, was listed as “endangered” by the U.S. Fish & Wildlife Service in January 2017.

Dairyland recently planted two pollinator plots of 1.5 to 2.5 acres and identified a 3-acre site in Minnesota. Plans include interpretive walking trails and information kiosks about the benefits of pollinators and the plant species. The co-op is also working with the Mississippi Valley Conservancy on an 8-acre bluff within a conservation easement to remove invasive species and return the land to native plants, including pollinator species.

“We want to develop high-profile sites, such as those located by subdivisions, for pollinator signage to educate the public on what we are doing and why we’re doing it,” said Foss.