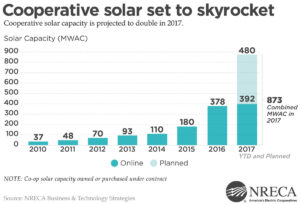 By the end of 2017, the total solar energy ­capacity of America’s electric cooperatives will be five times what it was two years ago, according to data released by the National Rural Electric Cooperative Association (NRECA). This year, co-ops are on pace to add 480 ­megawatts of solar, which would bring their total ­capacity to 873 MW. This more than quad­ruples the 180 MW reached in 2015 and represents a twentyfold increase over the 37 MW capacity in 2010.

“Electric cooperatives continue to aggressively pursue solar as an energy source and are the leaders in ­community solar,” said NRECA CEO Jim Matheson. “Co-ops across the nation are ­laboratories of innovation and are responsive to ­member needs as they work to power and empower ­millions of American families and businesses.”

In a nationwide survey conducted in December 2016 and January 2017, co-ops were asked to identify the ­factors ­driving their decision to offer or ­support solar ­programs, ­including community solar, ­utility-owned solar and rooftop ­instal­lations. Sixty-eight percent of respondents said they were motivated by a desire to increase ­consumer ­satisfaction; 59 ­percent cited consumer demand for solar offerings; 43 percent pointed to the decline in the cost of solar development.

Much of the growth in both deployed and planned solar can be attributed to col­laboration among co-ops. Forty-two percent of co-op solar projects are joint efforts ­involving either the generation and transmission co-ops or fellow ­distribution co-ops, ­according to the survey.

Between October 2015 and December 2016, more than 4,600 electric co-op board ­members and staff attended NRECA ­training, funded in part by the U.S. Department of Energy’s SunShot Initiative, to assist in the ­designing, financing, planning, building and marketing of solar ­programs.