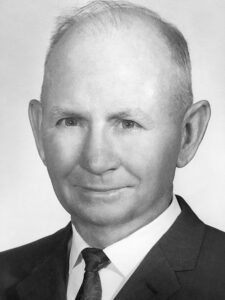 Ray Webb of Tunnel Hill was among the incor­porating ­pioneers who joined farm ­advisors to lead SouthEastern Illinois Electric Cooperative, Inc. from concept to reality. Webb called on Johnson County ­farmers to sign them up for the new service – even going as far as paying the $5 membership fee for some of his neighbors. Webb allowed them to work it off by picking peaches in his orchard.

Webb, a man many people trusted, was instrumental in acquiring the land on which Southern Illinois Power Cooperative’s (SIPC) Lake of Egypt plant and transmission system was built. One of the original directors of SIPC, Webb was on hand for the ground breaking ceremonies on July 21, 1961.

Webb’s son Kenneth followed his father’s legacy by serving on the boards of SouthEastern Illinois Electric and SIPC.

In celebration of the AIEC’s 75th anniversary, this is ninth in a series of profiles on Illinois’ rural electric pioneers.