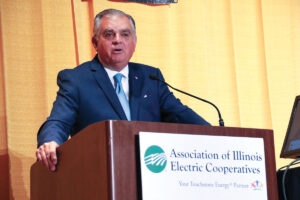 At the Association of Illinois Electric Cooperatives’ 75th annual meeting held in Springfield at the end of July, former Congressman and Secretary of Transportation Ray LaHood asked co-op leaders to ­promote good policies and bipartisan politics.

He said co-ops have been ­successful for the last 75 years because of a ­willingness to get into the ­political arena and not just be spectators. “People who are elected can’t be experts in everything,” said LaHood, “although many have their own ­expertise. Some are lawyers. I ­happened to have been a teacher and had worked in government. When you visit congressional leaders you bring your knowledge and ­expertise, and you also bring with you the ­banner of an organization that is well respected and has great credibility.”

LaHood said co-ops have also been successful because they’ve mentored young people through programs like the Youth To Washington Tour. “Give them an ­opportunity. Do it in the communities you serve. Do it in your ­organizations,” he urged.

Known for his bipartisan ­leadership, LaHood said “I know for a fact everyone in this room is not of one party. But what do you all do? You work together. When you work together good things ­happen. Problems get solved; issues get resolved. If bipartisanship breaks out in our state, it will be a better place and you all know that. We need that in Illinois. We need it in America. I hope that we get it after the presidential campaign is over. That is what America wants. Americans want their people in Washington to do what you all do day in and day out. You serve on church boards, school boards, library boards, and co-op boards. And do you agree with everyone you serve with on those boards? Of course not. But you talk with one another. You work with each other and you resolve issues. That is what we need the people in Springfield and in Washington to do.”