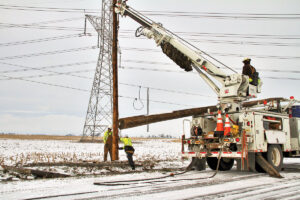 The Christmas season started off with major outages as Mother Nature threw blizzards, tornadoes, floods and ice storms at co-op line crews across the country.

Here in Illinois, ice storms hit Corn Belt Energy taking out more than 100 poles, breaking cross arms and downing trees and power lines. Transmission lines serving the co-op’s substations were also downed by the ice storm. Six other ­cooperatives sent crews to help in restoration efforts. At the peak of the outage on December 28, the co-op estimated at least 5,000 members were without power.

McDonough Power Cooperative in Macomb also had ice storm outages and asked for help from other electric cooperatives. Linemen from Adams Electric Cooperative helped line crews working widespread outages, mainly from the north edge of Macomb up to Monmouth in the McDonough Power service territory. Wind and ice left more than 30 power poles and lines on the ground. Ten transmission line poles that serve members on two substations caused a long outage.

Jim Thompson, Adams Electric general manager said, “Storm damage from an ice storm is often described as looking like a war zone. We received help from other cooperatives during the storm in July that hit our service territory. It is time for us to reciprocate and send help to restore service to their members. It is always better to send help than to need to receive it. We could have ice storms this winter and be asking for a return favor.”