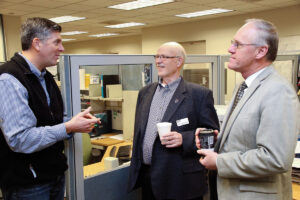 Congressman Darin LaHood (left) discussed rural Illinois issues with electric co-op ­leaders ­including Dennis Fredrickson, Corn Belt Energy Electric Corporation ­director and Vice Chairman of the AIEC Board of Directors; and Warren Goetsch, Menard Electric Cooperative director and Secretary of AIEC Board of Directors. LaHood, one of the newest ­members of Congress, brought Congressman Mike Conaway from Texas with him to the meeting. Rep. Conaway is Chairman of the Agriculture Committee.

“The backbone of this district is agriculture,” said LaHood. “I’m ­diving into the issues on the federal level that impact agriculture. Whether that is crop insurance, Waters of the U.S., or our transportation system – those are all important issues to us, and I’m trying to be a strong advocate on the federal level.”

In addition to discussing preparation for the reauthorization of the Farm Bill in 2018, the two ­congressmen talked with the co-op leaders about FEMA reauthorization and continued support for USDA electric loan and rural economic development programs.

Illinois Electric Cooperative General Manager Bruce Giffin told the congressmen that RUS ­funding is critical to the co-ops that need to rebuild lines constructed nearly 75 years ago. “For us, the RUS electric program is absolutely vital,” said Giffin. “We are also able to use the RUS economic development ­programs through the USDA office in Champaign. We have a loan out to a health care facility in Pike County and we have loaned to a small manufac­turer to help create jobs.”

Giffin also said the USDA has helped fund renewable energy ­projects that would not have otherwise been feasible. He added that a new ­economic development ­planning grant will help the co-op catalog the infrastruc­ture in its service ­territory, which is crucial for future rural ­economic development ­projects. He added that more long-term ­funding is needed for rural broadband infrastructure.

Regarding FEMA disaster funding, the problem has been in states with high population centers like Chicago. The current FEMA funding formula can make it difficult for rural areas of Illinois to meet the ­current ­damage threshold numbers for FEMA ­funding. LaHood was well aware of the problem because of tornado ­damage in Washington, Ill. in 2014. “That is one of the first bills I co-sponsored,” said LaHood. “We had a devastating tornado in November of 2014. They tried twice to get federal FEMA funding and didn’t get it.”

Greek Chicken
Love is the mane thing
Is $15 million enough?
Filling the holes in memories
Questions and answers about your social security
Tricks to dividing and conquering spring chores
A home as a system
Don’t forget safety when considering the addition of solar
Which laptop should I buy?